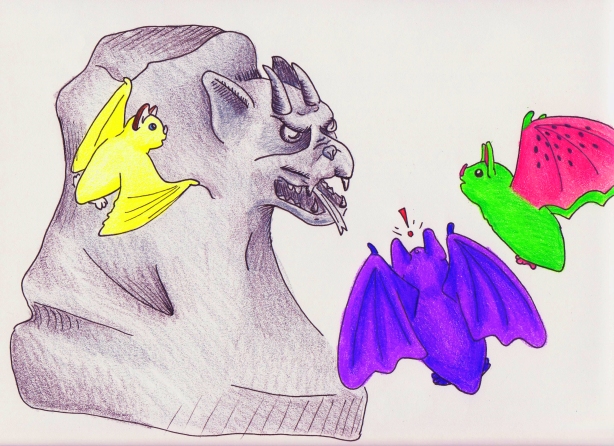 “Hey,” Mandarin Bat called from the web, “I’m certainly grateful for the assist, but, uh, ya think you could work on getting ‘Nana and I OUT OF THIS CONFOUNDED STICKY STUFF?”

The Bushel fluttered over and grabbed their friends, pulling while DragonFruit burned the web from the wall. In only a few seconds Batnana and Mandarin were free of the sticky netting and pulling the last treads of it from their fur.

The Bushel and their new found friend flew back into the main room and settled down on the table top.

“So, you live here?” Apple asked DragonFruit in admiration.

“Yes. I was born from a cactus-like tree on the way to the bay. I didn’t know there were others like me! I saw the castle and decided it would be a wonderful house.”

“We are here because we saw a cloud over the castle, do you know what it is?” Watermelon asked.

“A cloud? Why would that be unusual?”

“We looked at it from across the bay. It’s dark. We think it’s some kind of animals, not just a cloud, and they are swarming above the turrets!” explained Grape Bat.

“I haven’t been outside recently,” DragonFruit replied, scratching his chin in thought. “Maybe I could come with you.”

Strawberry bounced, “Yes, but first: can we see more of the castle?”

“Why of course! I shall give you the grand tour!”

…After showing them three rooms that looked pretty much perfectly alike: stone walls, a window, wood floor broken through in some places, DragonFruit paused.

“Come to think of it,” he said, turning to the rest of them, “Most of the rooms are empty and look about the same.” He scratched his head. “O! But there is ONE room, in the top of one of the towers that’s interesting!”

He led them up one of the winding staircases, passing through the shafts of gold light from the skinny, tall windows. They went up, up,up, all the way to the top floor. He stopped in front of an old wooden door that was open just a tiny crack. All the Bushel hovered around behind him.

“You’ll see!” DragonFruit said, and wedged himself between the door and the door frame, pushing the door with his feet while clinging to the frame with his wings and pressing his back against it to open it just a little bit wider. “Go in!”

With a little wiggling, the bats popped through. The light in the room was much better than out in the tower’s hallway! The sun, on its way down for the day, shone through a big round window, much like the one from the feasting hall downstairs. There were also several smaller square ones, in order to bring in as much light as possible. After all, when people lived there they only had candles for light and having nice big windows would help tremendously! The room filled an entire half of the top floor of the tower. There were several tables, and they were covered in strange tools. Hammers, chisels of all sizes, tools for measuring, and tools for cutting. Everything was covered with dust and cobwebs.

“It’s a TORTURE CHAMBER!” Mandarin Orange insisted, picking up a chisel and brandishing it as best he could while flying at Strawberry. “I’ll get that secret outta ya, see!”

Strawberry giggled and spun through the air and out of the way. “You’re totally fermented”, she laughed as Mandarin lost his balance and summer-salted onto the table behind her. Dropping the chisel, he sat up and shook his head to regain his senses.

Grape smirked at him as Lemon grabbed hold of Lime. “You don’t think there are ghosts, do you?” he asked.

Lime patted him on the ears. “Of course not, you silly Lemon Drop.”

“It’s not a torture chamber, “Grape corrected. He flew over to the table right in front of the window. On it sat a big stone and more tools. “These are the tools of an artist!”

This got Batnana’s attention, as she always likes the idea of creating things. She landed on the top of the stone and looked down at Grape where he sat on the table.

“These tools are used for carving! Specifically, for carving stone. What we have here, is the room of a sculptor!”

Mandarin sighed. “Ya know, sometimes you’s a total buzz-kill.”
Ignoring this comment, Grape continued; “Some sculptors claim that they don’t create the sculpture, but that the sculpture is already in the stone, or piece of wood, they simply release it.”

“How poetical,” Apple sighed with stars in her eyes.

“So, what was the sculptor ‘releasing’ from the stone Batnana is sitting on?” Watermelon asked.

They all fluttered over to the light side of the stone to see.

Just as they turned to look, a giant shadow swept across the window! As it passed, all the Bushel squeaked in surprise, not only because of it, but because upon the stone was carved the face of a snarling dog with horns!