All the Bushel shuffled forward together as he plunked down on the tree trunk, his fox tail twitching.

“Where did you come from? We’ve never seen you on the island before!” Watermelon asked.

“I come from everywhere!” Vulpes answered. “Here and there and near and far. I travel, you see. It’s why I have a bag. And a hat. Not proper to go traveling without a hat!” He looked at Lemon. “And no worries, little Fruit, I do not eat other animals, though I do eat lots of things! It’s one of the best things about traveling!”

“Come sit by the fire with us,” Blueberry Bat offered.

They all hopped down to the sand beside the fire and Vulpes leaned on his bag. The flames had almost gone out from neglect, but DragonFruit threw on some more sticks and breathed fire on it to get it going again. The FoxBat lifted a log that would have been too heavy for them and pushed it up against the side of the flames so it could catch.

Mandarin Orange asked what sort of things Vulpes ate on his travels.

“All sorts,” he told him. “There’s different fruits and veggies all over the place! And then there’s all the stuff people make!”

“What are people?” Grape asked.

“You mean, you’ve never met a people before?” he replied, shocked. “They’re almost everywhere. Some are scary, but most are magic, even if they don’t know it! They make all sorts of fun and wonderful things!” he pulled his bag out from behind him and opened it. “It doesn’t look that big, but I swear it’s bigger on the inside,” he told them as he stuck his upper half down into the mysterious thing. “Aha!” came a muffled sound and he came back up with a strange metal object with a handle and a spout. He stuck his head back down inside again and came back once more with a white bag filled with broken up dry leaves and a jar of thick amber liquid.

“Honey!” Mandarin squealed with joy. He’s rather a fan. “The BuzzBees trade that to us sometimes when Apple and Pear give them a song to sing as they work!”

The FoxBat nodded and held up the honey to the light of the fire. The sun had set now and the light made it look like it was glowing. Batnana cooed at how pretty it was.

“I am going to make you something tasty, right now!” he told them. “Back in a sec!” he flew off in the direction of the stream that came down the mountain to the bay to fill the kettle.

The Bushel talked excitedly together all at the same time while he was gone. Mandarin just knew that this new friend could give him an idea of what to make with his flour!

A minute later, Vulpes returned, water sloshing in the kettle. He plopped it onto the big log right beside the fire.

“When the kettle -that’s the thing with the water in it- when it screeches, it will be almost ready. We’re making the water hot.” he looked around. “Do you guys have cups?”

Mandarin had brought the emptied flour sack with them to hold their hollow acorn shell cups that morning so they could drink from the stream or for if they found a citrus tree to squeeze. He scrambled over to where he had stashed it under the bent over palm trunk and retrieved them.

“This drink was invented by people in the east part of the world. They take special plants and dry them and grind them up. Then they add spices. There’s all different kinds, but this is my favorite! Smell!” He passed the bag around the fire and they all took turns sniffing.

“I smell Cinnamon!” Mandarin claimed. “Lots of other things too, but I don’t know what it all is.”

“That would be the cardamom, cloves and ginger!”

Just then, the kettle started to whistle. Vulpes pulled it away from the fire, opened a latch on top, and stuffed the bag into it. He took their acorn cups and nestled them in the sand so they wouldn’t tip over, and put a big dollop of honey in each one.

“Now, normally there’s milk, but I assume that would be hard to get at the moment, so it can wait” Another minute and he poured the hot water, which now smelled like the spicy bag, into each cup and passed them out. 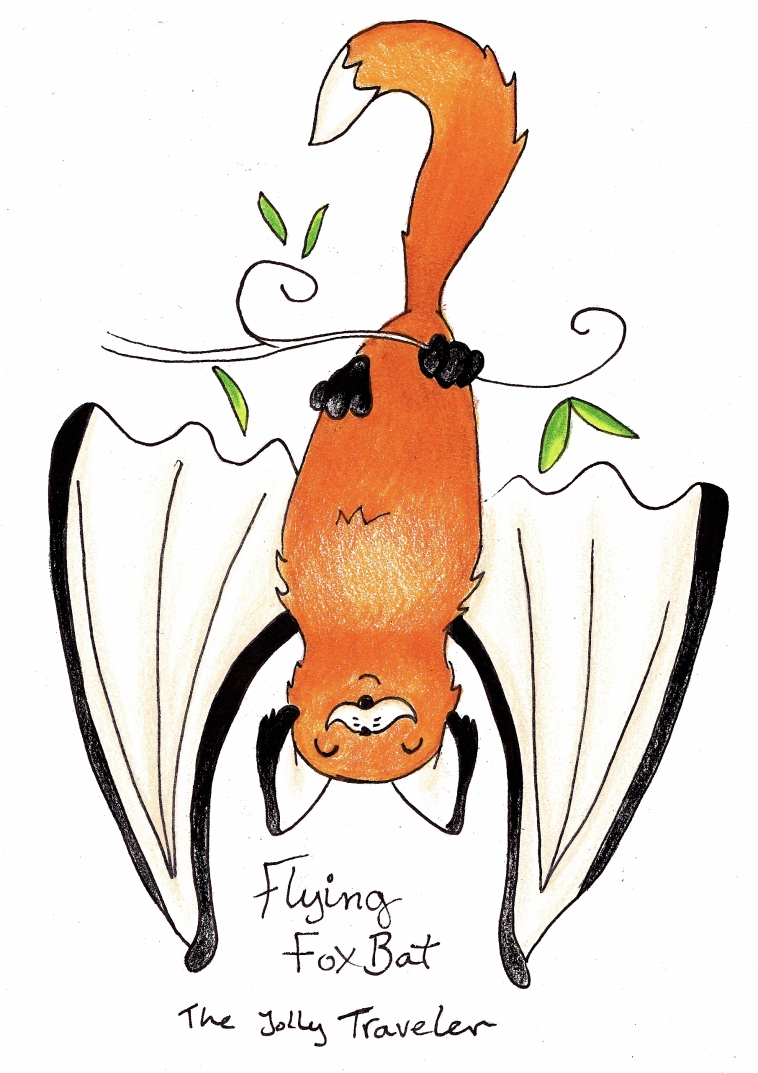 The next afternoon, all the Bushel decided they wanted to spend the day at the beach. Mandarin still couldn’t think of what is masterpiece should be, so he agreed to go along, thinking he might find inspiration by the sea.
In pairs, they jumped from the edge of the fruit grove and dove, letting themselves circle and loop until getting close to the breaking waves. Then they opened their wings and caught the rising air, feeling the mist on their wings. The weather was bright and sunny, though the sun was close to Willowyk mountain, there was still hours of sunlight left to enjoy.

There not being much of a sand below the cliff, they flew over to the west edge of the bay where a nice wide beach and much calmer waters resided. Having recently discovered that they could flap their wings in the water to swim, they were a funny sight! Colorful little bats all flopping about in the water, splashing each other and squeaking with joy. Batnana and Strawberry Bat built a sand castle together. After about an hour, DragonFruit showed up with Chip. Chip couldn’t swim. He sunk like a stone, which one expects from a Gargoyle. So he played in the surf while they took turns riding on his back. He had grown a lot since they last saw him weeks before, but he still looked more like a rolly-polly pugoyle rather than a big scary gargoyle.

After a few hours, the Bushel retreated to a clump of low leaning palm trees beside some big rocks for a break from the sun and surf.

“I think I’ll build us a beach bonfire we can enjoy with the sunset!” Kiwi said.

“It will be a nice way to start the night,” Blueberry pointed out. Chip wagged his curly tail and gave a “chuff”.

They gathered the wood and Kiwi stacked it just right so enough air could feed the fire. Then she stuffed some of the fallen palm fronds into it and used a piece of sea glass she had collected earlier to focus just enough of the almost setting sun’s rays to light it. The Bushel let up a cheer as the dry driftwood caught, and soon they had a nice fire. They perched in one of the bent over palm trees and watched as the sun began to slide behind the foot of the mountain. They could just make out the silhouette of Willowyk Castle.

“I wonder how many different trees are on the island,” Grape said as he looked at all the different shapes that the trees painted against the pale pink sky.

Suddenly and without warning, a loud voice came booming from above “Coming in for a landing!” it yelled just as a huge figure zipped into one of the taller palms! THUNK! There was a scattering of palm fronds and the tree swayed. A moment later, something big and orange plunked down onto bent low tree trunk that the Bushel was clinging to. The first thing they saw emerge from the pile of orange was a fluffy tail with a white tip! Then, the creature righted itself. He was much bigger than them, probably 3 times as tall and he stretched out giant black wings that were twice as wide as he was tall! He had a white mark on his muzzle that looked like a moustache, and on one of his black and white ears sat a top hat. He scampered down to the base of the trunk to retrieve a bag he had dropped before he fell. It looked like one of those old black leather doctor’s bags with a handle at the top.
The Bushel, rather in shock from the speed at which this had all happened, looked on silently, merely blinking every few seconds.

“You must excuse my rather unseemly arrival,” This weird stranger said as he dragged his bag back up the trunk toward them. “I was on a rather strong breeze, you see, but my wings are awful tired and I saw your fire and thought how lovely it would be to have some company and a bit of a break-” He noticed how they were all staring at him, Lemon hiding behind Lime with an alarmed look on his face. “So Sorry,!” he went on. “I didn’t mean any harm! I should introduce myself,” Doffing his hat he gave a little bow. “My name is Vulpes, and I’m a Flying FoxBat” 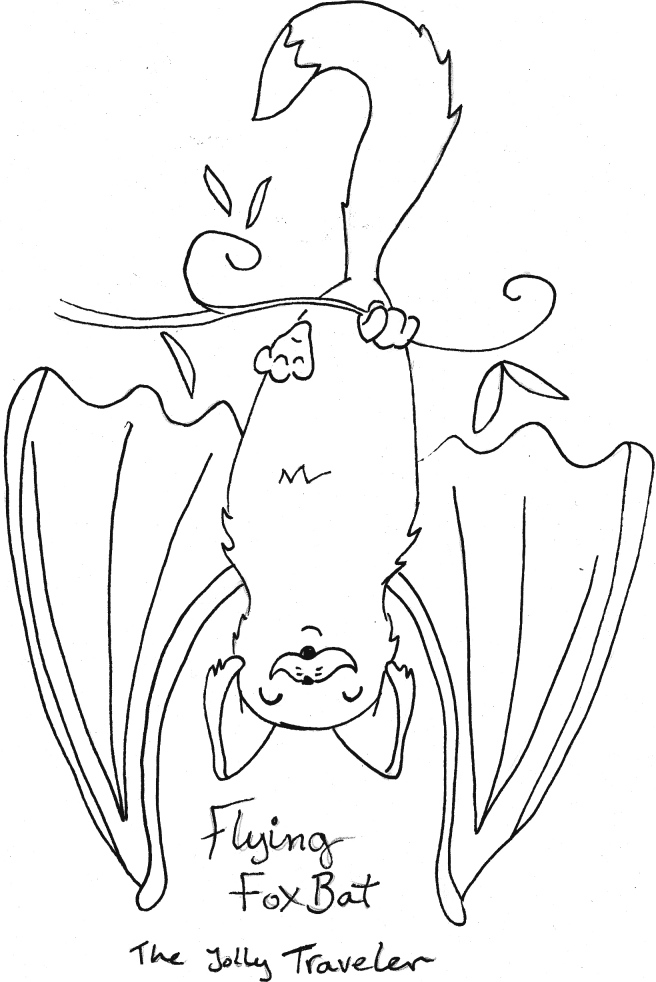 This is Flying FoxBat. He is going to show up in the next part of our story! His colors are orange, white and black. He is much bigger than the FruitBats. Learn more about real flying foxes here:

One warm evening in the Fruit Grove, as Apple Bat and Pear Bat sang songs from the lower branches of the apple tree and Batnana painted a portrait of Lemon and Lime, Mandarin Orange was nowhere to be found. That’s because he was over on the far side of the island, getting a sack of flour for his latest baking effort. He still wasn’t sure what it would be, but he was determined to try something new what would surprise and astound his friends! The flour was the last ingredient he thought he would need.

Not being the fittest of the FruitBats, hauling a sack of flour half his size across the island was quite an effort. The mill, which was nestled on a stream that came down out of the higher part of the island as it rushed to the sea, took wheat from a small farm nearby. There were no humans on the island, but the mill was left over from when their had been, and the creatures of Willowyk were unusually industrious. The millers were a pair of potbelly pigs, and they were happy to trade their flour to Mandarin Bat for a nice pile of cinnamon rolls.

The flour was poured into a muslin sack, and Mandarin was off, his wings beating fast, his toes gripping the top of the sack. It wasn’t long before he was huffing and puffing and wishing he’d brought Strawberry or Watermelon with him to help. He knew in the end it would be worth it though, this would be his masterpiece!

The moon was high in the sky by the time he plopped onto the ground. For a minute, he just used the flour sack as a beanbag chair and snuggled on top for a quick nap. When he awoke, the dawn was creeping into the dark sky. With haste, he located one of the glass jars he had found on the beach in Crescent Cove and dumped the flour in, sealing it with the cork so no moisture would soak into his baking supply. Looking at his glassware collection, he saw he finally had gathered everything he would need to bake something grand, huge, and impressive!