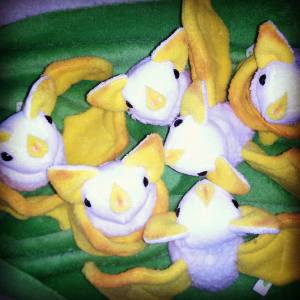 An hour later, all the Bushel were gathered at the top of the Banana tree, the tallest in the grove, where they could hang from one of the many giant leaves and look out across half the island. The sun was coloring the sky a rainbow as it slid west. Soon it would pull the edge of the world over it’s head for the night.

Kiwi Bat pulled a hollow reed from her backpack and grabbed one of the early dewdrops from the leaf where she hung. Sliding the drop down into the reed, she put it to her eye, and it became like a sea captain’s spyglass!

“Are you sure this is a good idea?” Grape asked Watermelon Bat. “We’ve never left the grove before.”

“Sure it’s a good idea!” Mandarin answered for Watermelon, giving Grape a slap on the back. “It’s YOUR idea, Grape!”

“We wouldn’t be here without it!”

Grape Bat flashed a worried smile at the others.

During this exchange, Kiwi scanned the forest for signs of BlackBerry Bat. “Um, what exactly do you think I should be looking for?” she finally asked, lowering her glass and glancing around at her friends.

“Wait, I know!” Apple said, dropping from her perch and doing with a twirl in the air. “We should call the FluffBats! Maybe they’ve seen something helpful!”

“Horray!” the Bushel cheered as they flew up over the banana tree and surveyed every direction of the island. As the last of the pink light of the sunset started to fade, Kiwi cried out “I see them!”

Squinting their little eyes in the direction in which Kiwi’s spyglass pointed, sure enough a tiny puff of white floated just above the trees way on the far side of the island.

“Yes, yes! Sound the shell!” Strawberry translated with equal excitement. A moment later she remembered that blowing the conch shell was her job, she fluttered down to where Kiwi had strapped it into a tree. She took a deep, deep breath, and blew as hard as she could!

Not a second later that tiny puffy cloud turned and started heading toward the fruit grove. It grew bigger and bigger until it was so close they could see that it wasnt a cloud at all, but a gigantic group of tiny, cottony white FluffBats with golden-yellow wings! The itty bitty bats came in for a landing, tumbling and giggling and grabbing onto the FruitBats with their little wings and toes.

“HI!” they all cried in unison. “YOU CALLED?” The FluffBats always mamaged to say the same thing at the same time. Grape hadn’t quite worked out how yet.

Unable to resist their cuteness, Blueberry scooped up three of them for a snuggle. “Yup, we are looking for a lost member of the Bushel,” she told them.

The tiny bats looked around at the FruitBats around them. “YOU LOOK LIKE YOU ARE ALL HERE.” they said.

“But there should be a BlackBarry Bat, because there is a blackberry bush,” Grape informed them.

The confused FluffBats huddled together as if to discuss this information, but they didn’t say anything, just wiggled their ears at eachother.

“We do drop seeds from our wings sometimes, maybe you have seen another bush someplace?” Grape added.

Another minute of ear wiggling and the fluffy bats turned to face their audience.

“THE PLACE YOU SEEK IS ONLY A MILE FROM HERE, BUT IT IS IN THE DEEPEST, DARKEST PART OF THE DENSE FOREST,” they warned. “THERE ARE INDEED SEVERAL SMALL BLACKBERRY BUSHES THERE, IN A SMALL CLEARING. THEY ARE COVERED IN THORNS, BUT VERY FEW BERRIES BECAUSE THEY DON’T GET ENOUGH SUNLIGHT.”

“Oh, of course it is,” Lemon lamented. Lime put a wing around his shoulders.

“WE HAVE NEVER SEEN A FRUITBAT THERE, BUT A DARK FIGURE HAS BEEN SPOTTED, FLAPPING IN THE SHADOWS.”

Having delivered the needed information, the FluffBats re-formed their cloud and rose up into the sky. “GOOD LUCK!” They called as they floated away on the evening breeze.

The Bushel contemplated this new information seriously. The deepest, darkest part of the forest did now sound like a terrible inviting place after all, especially for their first time adventure form the grove.

“I still say we need to investigate,” Watermelon insisted when he say their enthusiasm flagging. “If it were any of you in the deepest, darkest part of the forest, wouldn’t you want us to find you?”

They all exchanged wary looks, but couldn’t help but recognize what he said was true.”Of course,” Pear piped up, “But what if BlackBerry doesn’t WANT to be found?”

Watermelon considered this. “I guess that’s possible, but we should at least ask, and in order to do that, we have to find